“Then you will be court-martialled for dereliction of duty, breaking the rules of engagement, insubordination, and disobeying your CO’s lawful orders.” “I see,” Ekuton nodded. “I don’t have a choice.” “We both know how the court-martial works. You will be found, you are, guilty as charged. Termination of commission without benefits.”

Major Stanley Ekuton sat ramrod straight on the senior passenger’s seat in the Armoured Personnel Carrier (APC) manoeuvring along the winding motorable track eight kilometres beyond the Kenya-Somalia border, his throat dry with agitation. His Commanding Officer’s last words were still fresh on his mind: OC, do not cross that border! 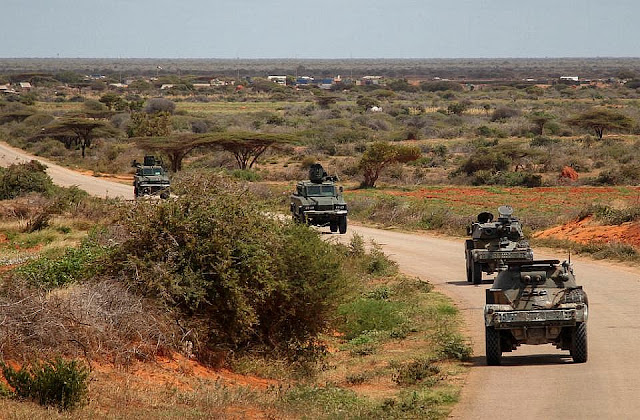 
Ahead, through the dust, the enemy was escaping.

“We should not be sitting ducks in the camp when al-Shabaab come to attack us,” he had replied. “We, too, should take the battle to them.”

And with that, Officer Commanding Bravo Company, 80 Airborne Battalion of the Kenya Defence Forces, imposed radio silence on his battalion tactical command headquarters.

“We are pursuing the enemy to the depths of hell if we have to,” he had told his platoon commander. “Order the platoon to cross the border—”

“But, Afande, we are not supposed to cross the border. The rules of engagement—”

“Officer, adui ni yule unamwangalia akitoraka. Are we going to follow the rules of engagement without reason?”

“In case of anything, I take responsibility, sawa. Na ni mimi naongoza.”

“Yes, sir.” The platoon commander had ordered his platoon to follow the OC.

His warrior spirit was awakened; only the decimation of the enemy mattered. He saw the dust ahead rising, swirling up. He would no longer follow the rules developed by idlers in air-conditioned offices swinging from ergonomic chairs in Nairobi. Ati troops operating along the border should never cross into Somalia!

To kill for his country, to defend his motherland, was his duty. He was not going to let the enemy go.

Al-Shabaab had killed many a soldier from his company, and his not being able to do anything had worn his nerves and strained his command.

“Where are they?” he asked his driver. “I don’t see the dust ahead.” 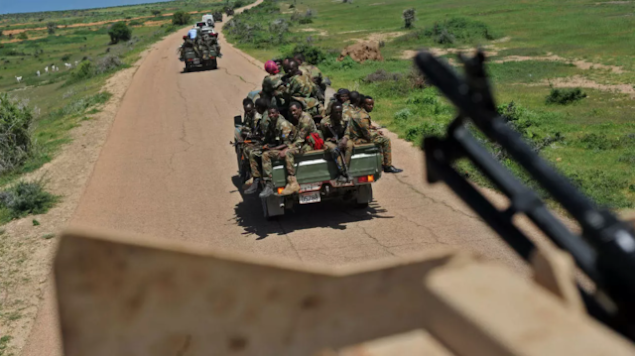 
Hardly had the driver answered when he felt a sense of fatalistic dismay as an RPG projectile appeared in his sight, headed at the senior passenger’s side, aiming at him.

His eyes narrowed to slits, sweat sliding down his face and drenching his face veil.

“Swerve to the right,” he yelled. However, it was a nanosecond too late.

Before hitting the 20mm-thick bulletproof windscreen, he winked, the projectile exploded, and he ducked. The APC lifted off the ground, overturned airborne, hit the ground, rolled, and stopped.

Thousands of shrapnel penetrated his helmet, body armour, and struck off his limbs. Hot wind raged through the infernal war machine as the explosion burned, his skin smeared from his shoulders, and his body disintegrated. He tried to haul himself blind out of the doomed APC, but nothing happened. 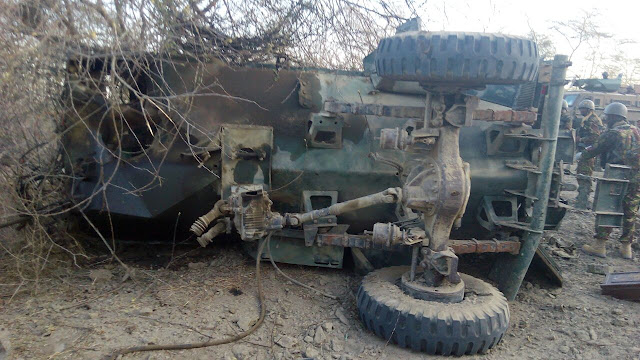 The medivac medics took one look at Major Ekuton’s charred and scorched body and nodded at each other in silent agreement: it was a VIP.

When the Y12 aircraft landed at Moi Air Base in Eastleigh, medics first attended to the injured and wounded—sitting and lying cases—moved them to the waiting ambulances ready to take them to the Base Medical Centre and others to the Defence Forces Memorial Hospital.

When it came to the dead, the VIPs, one medic realised that rigour mortis had not yet set on one of the VIPs.

Medics swarmed to the plane and loosely swathed his body in blankets, put it on a stretcher, and transferred it to the Huey helicopter that was about to take off for a mission in Mombasa.

The Huey touched down on the helipad at the DFMH, and a medical team was ready for him. Within no time, they took him straight to the burns unit on the hospital’s emergency wing, into a quiet and secluded world where everybody wore masks and long green sterile robes.

However, Major Ekuton sank in a dark bottomless pit, not knowing that morphine was helping him stay there. He only heard the distant, quiet voices of the masked figures as they worked over him.

“Can’t be cleaned now, not until it stabilises. It will be days before we can clean it.”

“The head surgeon will advise.”

The pain was an endless ocean across which the waves rose and fell, the surf breaking at the shore of his soul. Major Ekuton smelt burning gunpowder, petrol, and skin with the pain. Sometimes he felt the prick of a needle, drugs fighting infection fevers, and a burning thirst no amount of liquids could quench. Whatever he was going through, the pain and hell were twins.

He crawled out of the pit one day and saw eyes peering over white surgical masks.

“He has come out of it,” a voice emanated from one of the masks.

But then, he drifted off again into the slough of nothingness. The next time he opened his eyes, he met friendly, cheerful faces, men and women proud of resurrecting the dead.

“He can now be moved to Elgon Ward,” said a youngish surgeon whom he wished he could know his rank.

“Yes, sir,” a nurse in army uniform beneath her white coat said.

“Ekuton, you are going to be fine. You are out of danger now,” the surgeon told him. All he did was node.

In Elgon Ward, he was assigned his room.

“Sir, I’m Senior Sergeant Wavinya. I am your assigned nurse. You are going to be fine.”

“How long have I been here?” He asked, but he did not recognise his voice.

“Six weeks. But when they brought you in, they thought you were dead. You are fortunate to be alive.”

Major Ekuton glimpsed the depths of her compassion. “Thank you,” he replied.

During ward rounds, the following day, one of the doctors, a brigadier, said to him, “Ekuton, we did our best to save your life. You are once more a viable human being, though you lost a lot. We had to do skin grafts and numerous surgeries to save your eyes, but your ears can be reconstructed. For the face, you will never look the same again, and you will live with some shrapnel in your head. It’s not risky, though.”

After the ward rounds, Ekuton asked Senior Sergeant Wavinya for a mirror. Despite her protestations, he insisted.

The face that stared back at him did not have eyelashes and brows, the eyes round and startled, with clumsy lids and puffed dead-looking flesh beneath; the scalp was burned away and had a tight lipless mouth. The skin and flesh was a patchwork, joined by seams of scar tissue drawn tightly over his cheekbones; the nose a shapeless blob; and the ears small bulges as though they were fastened haphazardly to the sides of his head.

When he moved his mouth to talk, it twisted briefly in a horrid rictus and then regained its frozen shape.

I can’t talk without straining. He didn’t know he had said that aloud.

The first visitor he got was a military police officer, a lieutenant colonel loathed and infamous for his blind obedience to authority disguised as abiding by the law to the latter. The lieutenant colonel did not bother with niceties; he took the seat beside Major Ekuton’s hospital bed and opened the file he had.

“Major Ekuton, Commander Kenya Army has issued instructions for the formal resignation of your commission,” the senior officer started, and Ekuton stared at him.

“This way, you will go home with benefits.”

When he joined the forces, he wanted to defend his motherland; kill, not die, for his country. Resigning his commission was not part of the plan.

“Then you will be court-martialled for dereliction of duty, breaking the rules of engagement, insubordination, and disobeying your CO’s lawful orders.”

“We both know how the court-martial works. You will be found, you are, guilty as charged. Termination of commission without benefits.”

Ekuton did not reply.

“Here are the necessary documents. Please sign here, and here; your CO and Brigade Commander have already signed.”

Ekuton weighed all the options—he was toast. He took the papers and signed.

“Sawa,Officer.” The lieutenant colonel gathered the papers, placed them in the folder, and rose to go.

Ekuton’s heart tightened and sank to the pit of his stomach. “So, system inanitupa sasa juu nime-cock …”

“Officer, you are responsible for the deaths of ten soldiers and destruction of two APCs, weapons, and ammo; disobeyed your Commanding Officer; broke the rules of engagement; and displayed lack of sound judgement as an officer,” he paused and drew a deep breath. “Military Police recommendation was that you be tried by court-martial and that the prosecution is instructed to ask for the death penalty. But thank God uko na wire mrefu, Officer, and these political times are volatile. The Deputy President himself intervened, and that saved you. So, badala ya kuongea mbaya hapa, consider yourself very fortunate.”

And with that, the lieutenant colonel left; his footsteps cracked on the floor and the pathway outside as he left Elgon Ward.

Stolen From the Altar

MEN DON’T CRY. GOD FORBID! When the Pastor said ‘If there’s anyone against these two becoming two in one, come out now or forever keep your peace’, I did not

Do You Want To Hone Your Writing Skills?